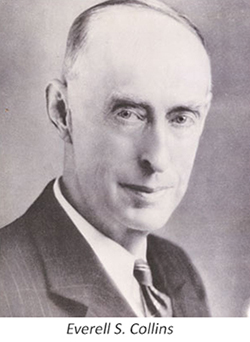 When the College of Puget Sound moved to its current location fall 1924, the north half of the basement of Jones Hall served as the college library. There it remained for the next thirty years. But from the beginning CPS President Edward Todd foresaw the need for a separate library building, and in this pursuit he had a friend in longtime trustee and benefactor Everell Stanton Collins.

Collins, a second generation lumberman, was born in Cortland, New York in 1866. Everell’s mother, a dedicated Methodist, passed her deep religious commitment on to her son, who played critically important roles in the development of two northwest colleges—Willamette and Puget Sound. President Todd and Everell Collins were in conversation about a new library when, in 1940, Everell died suddenly of pneumonia. Everell’s unsigned will left CPS $500,000 to construct the library. But the will that governed disposition of Everell’s estate included only $100,000 for the library. Everell’s son, Truman Wesley Collins, shared his father’s vision and love for the College of Puget Sound. Truman became a personal friend and admirer of Edward Todd’s successor, R. Franklin Thompson. Although he was not bound to do so, Truman Collins saw to it that the college received the half million dollars for the library. Appreciative CPS students honored him with a standing ovation at the April 14, 1953 groundbreaking for Collins Memorial Library.

Architect Silas Nelsen began work in the 1940s on designs for the library. It took him quite some time to deliver a design that President Thompson felt was appropriate for the campus. Nelsen’s original design was “a rather oblong building without too much decoration.” Thompson insisted that the library “had to be beautiful as well as practical and useful.” President Thompson himself contributed to the building’s design. He had studied at Oxford and at his suggestion a tower was added, based on the interior tower of Oxford’s Magdalen College. Today the tower houses the Howard R. Kilworth Memorial Carillon, a 1954 gift from Howard’s brother, William W. Kilworth, for whom Kilworth Chapel is named.

The library was completed early in 1954. On Thursday, April 8, students, faculty, staff, and alumni moved 45,000 books from Jones Hall to the new Collins Memorial Library. Library director Warren Perry borrowed book carts from several libraries in the region so that all of the books could be moved in one day. Dean John Regester canceled classes and, after the books were moved, students departed for spring vacation. A tent tunnel was constructed between Jones Hall and the new library to protect the books in the event of rain. It did rain, and the tunnel saved the day. The Seattle Times’ Sunday, May 9, 1954 Color Rotogravure Pictorial section contains a five-page story on the book move, accompanied by 12 photographs.

Collins Memorial Library was built to hold 80,000 volumes. At first the library contained faculty and student lounges. But after 20 years of adding to the collection, all of the available space was filled. In 1974 a new $2.7 million wing was dedicated, quintupling the library’s capacity for growth. The second floor of the new addition housed classrooms and faculty offices until 2000, when Wyatt Hall opened and Collins Memorial Library received a major renovation.

Everell Collins died 14 years before the library named in his memory opened. Had Truman not honored his father’s intent, the library would not have been built as it was when it was. And as a historical footnote relevant to an ideal of today’s University of Puget Sound, Truman Collins was among the first to champion the practice of sustainable logging methods. Sustainability continues to the present day as the operational philosophy and practice of the Collins Companies, headquartered in Portland, Oregon. The Collins Companies’ forests meet criteria of the Forest Stewardship Council for timber sustainability, forest ecosystem maintenance, and socio-economic benefits to the community. 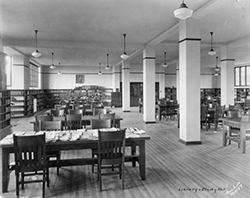 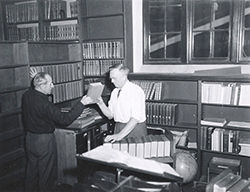 Preparing the move from Jones Hall to the Collins Memorial Library buildilng. 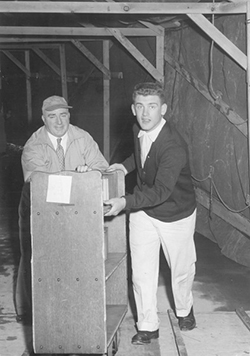 College of Puget Sound President R. Franklin Thompson and 1954-1955 ASCPS President James Nelson wheel a cart of books from Jones Hall to the new Collins Memorial Library on April 11, 1954 through the tent tunnel that protected the books from rain.  (UPS Archives #02_026a_0023) 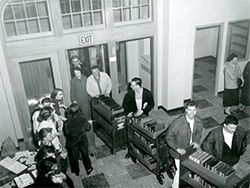 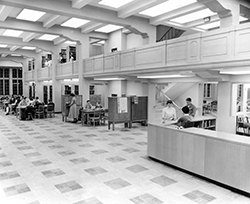 A 1954 view of the circulation desk and card catalog of the new Collins Memorial Library.