This guide is intended as a starting point for research about Leroy Ostranksy, a composer, educator, and author from the University of Puget Sound. 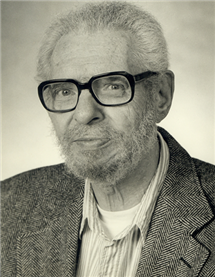 Leroy Ostransky was born in New York on January 17, 1918, to Russian immigrants. In his memoir, Sharkey’s Kid, he recounted his difficult childhood growing up on the lower East Side.  His family made whiskey during Prohibition in the back of the saloon they owned. Ostransky described his father, Sharkey, as “the only Jew with a knife scar on his jaw, a tattoo on his left forearm, and tears in his eyes every time he heard a cantor chant the Kol Nidre on his Victrola.” Sharkey loved music and had aspirations for his son to become a child prodigy and virtuoso violinist. Young Leroy was given violin lessons and practiced in the back of the saloon. He failed to meet his father’s high expectations and was beaten regularly. Ostransky had no talent for the violin; he preferred playing piano and jazz. At age 14, he was sent to a reform school after he stole 212 library books. The following year Ostransky dropped out and ran away. He supported himself painting houses and playing piano in jazz clubs.

During World War II, Ostransky was drafted into the army and stationed at Fort Lewis, Washington. He served as the music arranger for War Bond shows from 1944 to 1945. After the war, he married and enrolled at the University of Puget Sound. His talents were quickly recognized and he was hired as an assistant in music theory from 1946 to 1948. He formed and directed the Workshop Band, whose purpose was to perform music written by arranging classes. The band was one of the most popular organizations on campus and performed at freshmen assemblies, homecoming shows, and other events.

Ostransky was a prolific writer. He composed five symphonies, a comic opera entitled “The Melting of Molly” (about a woman trying to lose weight) and numerous instructional pieces for classroom use.  He was commissioned to write a piece for the Washington State Bicentennial celebration. “Symphony No. 4: American,”  based on three folk songs, premiered on October 23, 1975.  It was performed by the Seattle Symphony, along with the University of Puget Sound Adelphians and the Pacific Lutheran Choir. The date was  recognized as “Leroy Ostransky Day” by Tacoma Mayor Johnson and the city council. Upon acceptance of the proclamation, Ostransky commented, "I don't deserve it, but I'll take it."

An authority on jazz, he published five books on the subject. The Anatomy of Jazz was considered a standard text.  He also wrote music reviews which appeared in the Seattle Times. In addition he authored a Sunday column "Notes and Comments" for The News Tribune for 23 years and hosted a radio show "Oh, Oh Ostransky” in which he accompanied himself on the piano while commenting on current events and telling jokes. The Tacoma Arts Commission presented Ostransky with its 1982 Excellence in the Arts Award for his outstanding contributions to the arts in the city of Tacoma.

Ostransky was working on a book about Charles Mingus when he died in 1993, after a long illness.